While I was still a would-be and not yet a wannabe I really needed to get a tailwheel endorsement. I don't know what other people do in the same circumstances but I *thought* I could just offer a generous sum to find a CFI in the metro are where the Tailwind was. Turns out, CFIs are very busy these days.

At the tail/nosewheel divide in general aviation in the late 1950s, the Cessna 172, with its car-like Land-O-Matic gear, began its meteoric rise to the top of the aviation world until Cirrus became the best and brightest in personal transport over the last decade. The tailwheel thereafter became a quaint relic of yesteryear's flying, a cottage industry fueled largely by the cultists of Pitts, Van, and Cub.

Or maybe it has wider application than that.

Indeed, for those of us who began flying after 1956, or even those of us who had an inkling to join the cult after 1996, some special training is required. Indeed, the FAA's mandate for an endorsement indicates that there is something unique, special, and specialized about the kind of flying a tailwheel offers, not altogether different than a high altitude endorsement (for the need to understand the effects and signs of hypoxia) or a complex endorsement (to understand the systems knowledge of a constant speed prop and retractable gear, among other things).

There is also a sense with this endorsement that something has been lost and must be recovered. The grandfather clause is a really a fitting name of the actual problem here: it is mostly our grandfathers (and some grandmothers) who flew airplanes in their purest form, and we must turn to folks with the skills of age and wisdom in order to learn it. If you disagree with a taildragger as flying's purest form, read this.

So I did just that, in an airplane that so many others before me have done--a J3 Cub.

Many thanks to my colleague Diesel for the instruction, and for getting use those spectacularly large tires of his. It felt like proper flying, first taxiing around the narrow bends of KFLY's ramps and onto the dirt of 8/26. FWIW, April flying in the Colorado morning with the door open is cold, but that door-open stuff is pretty darn cool also. After this and some dewy-smooth landings on the first 1000' of astroturf of 5V4, I was a certified tailwheel pilot, and reconnected with our grandfathers' eroding skill. Now to keep it sharp, that's another thing...
Email Post 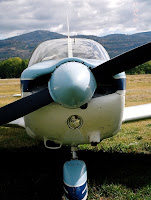